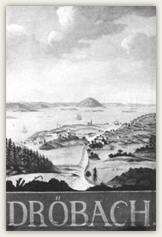 Drøbak, situated close to the fjord, has always relied on water in one way or another. The very first people to settle here on the steep hillsides sloping down to the water, surely transported both goods and people along the fjord. The Vikings would sail or row their longships to and from Viken (Oslo), and when the fjord froze during the cold season, the ice would carry them. During the Middle Ages Husvik was a place where the Vikings could hold court and hope to sort out conflicts of all kinds.

The first inhabitants built their small wooden houses on the rocks by the water, or on the hillsides. Some had a piece of land for growing crops, but fishing was probably the basis of existence. Up to mid-1600 most activities took place in the northern part of the village, i.e. Husvik, from where the crossing to Sand and Færgestad on the other side of the fjord took place. This connection across the fjord had to do with inn-keeping and commercial activities. In 1711 the innkeeper was named Ulrik Madsen. He was entitled to be called “Ferryman in His Majesty`s service” although it was certainly not Madsen who took people across the fjord.

In 1665 eight families were registered as inhabitants of Husvik, which was then the most “densely” inhabited part of Drøbak. Later people tended to settle down further south, i.e. at Vennebekkstrand, the area between the harbour and the custom house (Tollbodbakken). Jacob Carlsen, a merchant who really started the expansion of Drøbak, was entitled to use this area for his activities. Very soon it became the main place for storing timber to be shipped to other places, especially to Holland. Dutch sailing-ships brought corn, peas, grain, cheese, butter, Dutch gin, fabrics, pottery, bricks and tiles, and they returned home with “Dutch beams” on board. Among other things the beams were needed for damming up seawater. The reason why timber was exported as beams, was the lack of sawmills in the district. 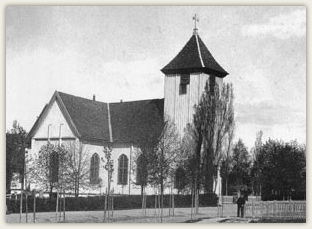 The Church
In the garden opposite the church there is a statue of Nils Carlsen (1734-1809). Being both a landowner, a shipowner, a banker and one who trades with timber on a big scale, one might say that he was a very prosperous merchant, and Drøbak became an equally prosperous little town. The number of inhabitants increased from 50 “souls” in 1665 to 7-800 during Nils Carlsens lifetime. He thought that a place of that size needed a church of its own. Together with his wife Anna Zachariasdatter he had a church built on his property, using timber from his own forests. The church was ready in 1776 and is still a landmark in Drøbak.

Facing the church is another remarkable building: Hospitalet. It was built a few years later and was dedicated as a hostel for poor widows among the citizens. Thanks to Anna Møller, a rich widow who gave the ground upon which the hostel was built, a growth of social conscience was established. Nils Carlsen also contributed to the hostel, which is still being used to benefit the citizens, especially the elderly ones. 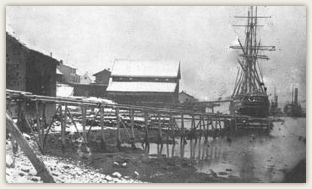 The harbour
All this added to the vitality of the place. In addition came the fact that Drøbak worked as a harbour for Christiania (now Oslo). It was hard to navigate large ships through the fjord`s narrow passages, and during the cold season the inner part of the fjord would freeze and make navigation even more difficult. As a result the ships would dock in Drøbak for loading and unloading. The goods were then transported further by horse and cart up the steep hillsides, or across the ice with horse and sledge in the wintertime.

From village to town 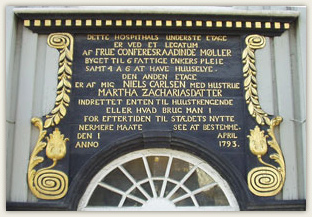 The number of 1093 “souls,” among them 15 merchants, 6 inn-keepers, 17 skippers, 3 ferrymen, 10 fishermen and 65 sailors had changed Drøbak from being a village to being a potential town. The privilege of such a status had to be applied for, therefore a petition was sent to the authorities, stating: “ Drøbak has its own church, hospital, system of poor relief, school, customs service, port authorities, 34 vessels, and a good harbour which works all through the winter. We consider it to be entitled to be called a town.” The petition was granted in 1842.

Skrivergården, still another of Drøbak`s spectacular old buildings (nowadays a children`s home and kindergarden) was originally owned by Hans Peter Ellefsen, a senior public servant of his time. A little further north is Ringgården, an estate which shows, even today, that the owner, Fredrik Ring, was a wealthy merchant. These two gentlemen founded Follo Sparebank in 1843.

Oscarsborg
Kaholmen, the small island just outside Drøbak, was strategically just right for building a fort. This was claimed as early as 1643, and in 1853 the fort was ready for military use. Drøbak, now a garrison town, could contribute to it all with tradesmen, goods etc, and thus benefit greatly. These days Oscarsborg is a military museum and open to the public.

The peak of trade and activity
Around 1850 a new and lucrative activity came into being in Drøbak, namely the cutting and selling of ice-blocks. Søren Parr, a ship 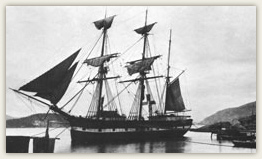 owner and founder, bought and hired ponds in the surrounding district. When they froze during the cold season, he would employ farmers and workers to cut the ice into blocks of 200 kilos. The blocks were then transported by horse and sledge down to the storehouses by the fjord. They were then shipped to places around the Northern Sea, particularly to England, Germany and France. At the most Parr exported around 100 000 ton ice a year. The cutting of ice was a blessing to the workers, who otherwise would have been unemployed during the winter. But nothing lasts

for ever. Modern technology would eventually make the ice superfluous, and Drøbak had to find other means for keeping the inhabitants employed, for example leisure and outdoor activities.
An old report from the ministry of health says: “The healthy location of this little town makes it an attractive place for city-people to come and have a curative and restful stay during the summer.” Thus Drøbak became a seaside resort, mainly for people from Christiania who visited and lodged in private homes while the owners temporarily moved into their little out-house in the garden. As the

place was reputed to be health-bringing and charming, people kept coming, and the inhabitants benefited greatly.

Artists, writers and other intellectuals particularly took a liking to the place.
Those who take a stroll in the park will see a building with the inscription Drøbak varmbad. It was built in 1902 with bathing facilities, such as hot baths or mud baths for medical treatment. These days the building is used as an art gallery.

The strait outside Drøbak has been the scene of many historical events. In the year of independence, 1905, a ship sailed up the fjord with a brand new Norwegian king onboard; Haakon 7. This was a very happy event for the nation. The fog that day was so dense that the reception committee at the destination did not think the ship could make it. But a very experienced and 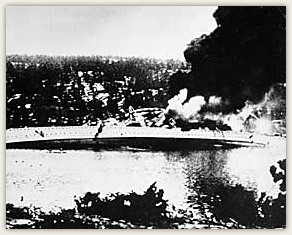 clever pilot from Drøbak directed the royal ship through fog and narrow passages all the way up to Christiania.
Another important date is the 9th of April 1940. At the dawn of a dark and rainy day a massive ship comes quietly up the fjord; no flag or lights can be seen. It is a German battleship named Blücher. Norway is about to be occupied. When the ship is outside Drøbak, a commanding officer at the fort gives the order to open fire on the invader. Several cannonballs and torpedos hit Blücher, and it sinks just off Drøbak. Colonel Birger Christian Eriksen will for ever be remembered for this event. His bust can be seen in the park, next to Blücher`s anchor.

A preservation society
Drøbak retains the image of being an attractive little village by the fjord. The wooden buildings from the 18th century, both the patrician ones and the more humble little fisherman`s houses, are still there. But time alters everything. Drøbak is also rapidly changing. It could easily become yet another place that has offered its distinctive atmosphere and charm in order to become a “modern and efficient town.”
The question is: How can this be prevented? 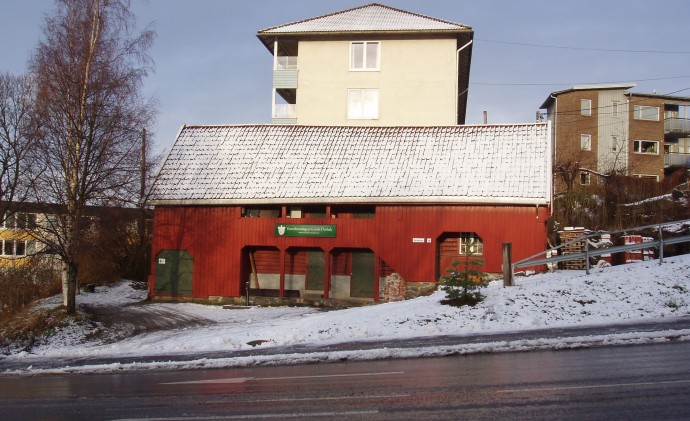 Around 1960 a group of concerned Drøbak inhabitants came together to discuss what could be done.
Blocks of flats had popped up among the low wooden houses, and it did not seem right. The expansion and modernisation of the built-up area needed to be controlled, not allowed to replace the old town. A preservation society, Verneforeningen Gamle Drøbak, was established, and an area development plan came into being. The plan, concerning what was considered as an antiquarian area, was approved by the local council in 1978. The plan is regularly reviewed, with regard to changing needs. The basic idea, namely to take care of our inheritance from previous times, is unaltered. “Verneforeningen” collects, preserves and uses old documents and photos concerning the history of Drøbak, and they honour people who restore their houses in accordance with the recommended plan.

In order to “take care of our inheritance,” courses in how to preserve buildings in an adequate way have been arranged. Those who take part can learn how to restore windows, doors, panelling etc. All the photos that have been collected are available and can give an idea of what colour, wallpaper or decorative painting to choose. The idea of training house owners in this particular craft has been encouraged and supported by authorities within the field, among them The Directorate for Cultural Heritage. A local craftsman, Per Willy Færgestad, has been the leader of the project.

Visitors can consult the tourist information and find a map, planned by “Verneforeningen”,which recommends a stroll around Drøbak, It comes in Norwegian, English, Italian and German. It can also be found on www.verneforeningen.no. 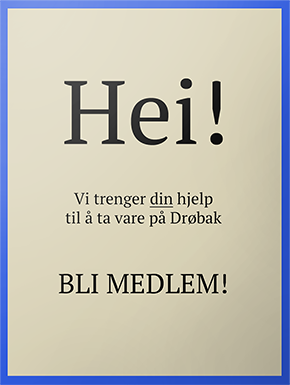